The world is Flat 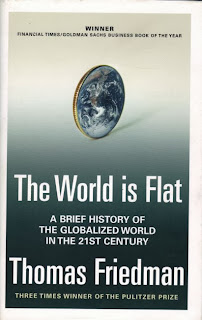 FRIEDMAN, Thomas
The World is Flat
a brief history of the globalized world in the 21st century
Farrar, Straus and Giroux (US); Allen Lane, an imprint of Penguin Books, London, 2005
[ISBN 0713998784 (Worldcat, Wikipedia)]
The beginning of the twenty-first century will be remembered, not for military conflicts or political events, but for a whole new age of globalization - a 'flattening' of the world. The explosion of advanced technologies now means that suddenly knowledge-pools and resources have connected all over the planet, levelling the playing field as never before, so that each of us is potentially and equal - and competitor - of the other. The world is wired so that Indian accountants or software engineers can now share an idea, team their skills or compete head-on for work with their US or European counterparts. Professionals everywhere, from China to Australia to Costa Rica, can work from home as if they were in offices next door to each other. The rules of the game have changed forever - but does this 'death of distance', which requires us all to run faster in order to stay in the same place, mean the world has got too small and too flat too fast for us to adjust?
Gepost door Eric Verdonck op 21:32